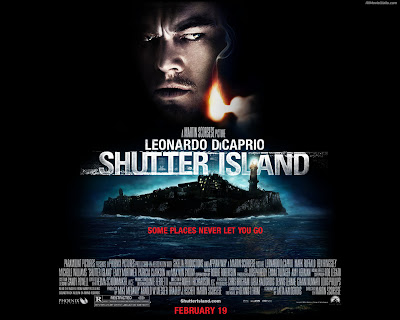 I think the colour scheme used is the unique selling point because there are various colours used which all come together to portray the genre of the film. The outskirts of the poster are masked in pitched black; which immediately delivers a mysterious aspect to the poster. The image of the actor, Leonardo DiCaprio, is concealed within the darkness of the poster and this is significant because this is a subversion. The image (actor) of the poster is conventionally the focal point, however, in this poster, the appearance of the actor is restricted and this reflects the story within the film. The subversion implies that the plot does not just resolve around the protagonist but has a bigger meaning and therefore, this idea suggests to the audience that the genre of this film is associated with mystery.

The lighted match acts as the light source for not only the image but the whole poster. The scarcity of light reinforces the idea  that the story within the film is very dark and conspicuous; which notifies the audience that the genre of the film is affiliated with ‘crime’ and ‘thriller’.

Due to the colour scheme, the focal point of the poster is the island. This image clearly shows that the island is secluded as the ocean around it is visible. The text under the island is in a vibrant red that contrasts with the blue sea; which makes the tagline stand out. The release date of the film is also in red to grab the audience’s attention. Conventionally, the name of actor who is the protagonist in the film is clearly stated, this in itself can influence/entice potential viewers as they may be fans of this particular actor and so, they are more likely to watch the film.
Posted by Unknown at 08:15

Email ThisBlogThis!Share to TwitterShare to FacebookShare to Pinterest
Labels: Research and Planning